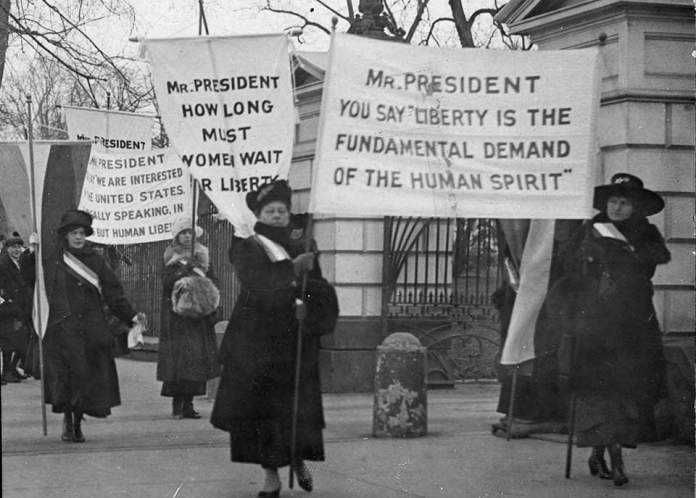 Even at its inception, the U.S Constitution required amendment to address concerns about the absence of a list of personal rights. States would likely withhold ratification if rights were not guaranteed. Ten Amendments were included, known as our Bill of Rights. The Constitution remained flawed. It still denied rights to slaves and women. More perfect is an oxymoron. If something is perfect, it cannot be improved. The Constitution was imperfect and was, and is, in need of improvement.

Though Abigail Adams asked John Adams to, “remember the women,” before the Constitutional convention, it did not happen.  According to the Constitution, slaves were counted as two-thirds of a person. They were property – a work force with no rights under law until the 13th amendment. The Constitution did provide the means for improvement – amendments, legislation, our justice system, right of assembly, peaceful protest, the right to elect our representatives – these have been used, and should be used, to expand rights.

Men and women organized in protest against slavery. Abolitionists established an “Underground Railroad”, use of a free press, literature, petition to congress, meetings and boycotts. Sadly, when territories applied for statehood, conflicting views on extending slavery to new states were the catalyst to violence – “Bleeding Kansas”, John Brown’s Raid, and ultimately, Civil War.

During the Civil War, Abraham Lincoln persuaded Congress to pass two amendments -the 13th abolished slavery and 14th granted citizenship to former enslaved persons. Postwar Southern states were brought back into the Union under Republican military rule. Eventually, former Confederates regained their civil rights. Former enslaved citizens had the Constitutional rights to freedom and citizenship, but not the right to vote, until 1870 when the 15th Amendment was passed. It gave the power to legislate, but not enforce. Many states passed laws that suppressed the black vote, such as Black Codes, property qualifications, and poll taxes. The vote was also suppressed by extra legal terrorist groups such as the Ku Klux Klan.

Women, who had played a major role in the Abolitionist movement, realized they had to organize to gain voting rights. Susan B. Anthony, Lucretia Mott,  Cady Stanton, and other women and men convened a Congress in Seneca Falls, New York in 1848.  Using the Declaration of Independence as their model, they issued the Declaration of Sentiments in which they demanded equal rights and the right to vote. A series of other Congresses followed, held in other states. America’s women’s rights movement was on its way.

On February 12, 1913 a small group of women left New York and headed for Washington to hold a protest march. They reached the capitol on March 3, 1913, the day before Woodrow Wilson’s inauguration. Thousands of Suffragettes marched for the right to vote. Four years later in 1917, on the eve of President Wilson’s second inauguration, one thousand women marched around the White House, in terrible weather, demanding the right to vote, “The Grand Picket”. Some protesters were jailed and assaulted, but the movement persisted. Calling themselves the ‘Silent Sentinels’, a rotating cluster of women stood at White House gates for months. They carried signs intended to challenge and embarrass President Wilson (American Experience, PBS). Harsh treatment of Suffragettes started to change public opinion. Gradually, President Wilson changed his own opinion. In 1918, Wilson’s address to the Senate supported women’s suffrage. An attempted ratification of the 19th Amendment failed to pass by two votes. But women who had played an important role as nurses in World War I gained Recognition of their service that finally swayed votes to gain passage of the 19th amendment on August 18, 1920. Women had gained the right to vote, but not yet equal rights.

Article I – Section 4 of the Constitution gave broad authority over elections. In the late 18th century, states granted the right to vote to property owning, taxpaying, white males. A farm based economy enfranchised most white males, but not tenant farmers and poor white men.  An industrial economy disenfranchised workers, who mostly lived in tenement or factory owned housing. In 1856, North Carolina was the last state to abolish property qualifications. Five states kept voter tax paying qualifications: Massachusetts, Rhode Island, Pennsylvania, Delaware, and North Carolina. Industrialists who had recruited immigrants to work in factories, build cities, and infrastructure resisted giving the right to vote to new citizens who did not own property. Though some new citizens would have voted for Republicans, the Irish, who did not have a language barrier and were politically knowledgeable, were a threat to Republican control. The right to assemble in protest was utilized to bring about voting reform. mostly peaceful, but some violent. Thomas Wilson Dorr, an Irish Harvard graduate, led middle class residents in an attempt to extend non-propertied voting rights in Rhode Island (Dorr Rebellion 1841 – 1842).

Another voter suppression tactic was a poll tax, which attached a financial burden to voting. The 24th Amendment, ratified on January 23, 1964, maintained the right to vote, “shall not be denied or abridged by the United States or any State by reason of failure to pay any poll tax or other tax.”

Gerrymandering, utilized by both parties, is the manipulation of the boundaries of an electoral constituency so as to favor one party or class. Introduced by Democratic Governor of Massachusetts Gerry Eldridge in 1812, the practice does not deny the right to vote, but overvalues the vote of the favored party and undervalues the other party. Redistricting is based on a census taken every ten years and controlled by the party in power. One party can gain the ability to manipulate the shape of a district to include a voting majority for their party and split up voters of the opposition. This reduces competition, creates “safe seats”, and guarantees re-election of incumbents. “A state’s legislature controlled by one party today can… easily enable, say forty percent of a state’s citizens.” (Huffington Post). That means that sixty percent of voters are disabled. Gerrymandering has become more of a danger today because technology facilitates the gathering of voter data. Gerrymandering is a threat to our electoral system and our democracy.

According to Vox the following are 7 methods used by states to make it more difficult to vote: