The election of 2018 produced a momentous surge of progressive candidates elected to the House of Representative.  A blue wave changed the People’s House from being controlled by extreme conservatives to progressives.  The pendulum that represents the U.S. Electorate has 40% on the extreme right and 60% ranging from center to left of center.  The pendulum’s movement to the left demonstrates the desire to move forward into the 21st Century.

In the nineteenth century, transitional leadership was demonstrated by Republican Abraham Lincoln early in his political career. According to Goodwin, he, “…had already developed a conception of leadership based upon shared understanding of his followers’ need for liberty, equality, and opportunity.”  President Lincoln responded to the abolitionist movement and gained the passage of the Thirteenth and Fourteenth Amendments to emancipate and extend civil rights to former slaves, taking steps forward to A MORE PERFECT UNION.

At the beginning of the twentieth century Republican President Theodore Roosevelt was sworn into office at the death of President William McKinley, a conservative Republican.  Roosevelt inherited several problems: panic in the Stock Market, rise of gigantic Trusts that stifled competition, political corruption, an increased gap between rich and poor, need to protect workers’ rights, the Great Strike of 1902, urbanization and the growth of urban slums.  Early twentieth century Progressive reformers protested against injustice and the dangers of unchecked capitalism.   President Roosevelt adopted Progressive principles. His Square Deal called for national regulation of corporate entities, financial institutions, and checks against the negative impact of extreme capitalism.

Democratic President Franklin Delano Roosevelt was sworn into office in the midst of the Great Depression of 1933. Which was caused by policies of both parties that unfettered capitalism. Doris Goodwin states, “Conservatives failed to remedy the downward spiral of the economy.  American industry was paralyzed. Following three years of precipitous decline the vital organs of the financial system, the nations bank,s were shutting down.  The downfall impacted agrarian and industrial America.” At that point F.D.R followed in the footsteps of his cousin Theodore and took bold action. Franklin proposed a Progressive agenda of “RELIEF, RECOVERY, REFORM”, a New Deal to turnaround our Nation.  New Deal programs were enacted by a Democratic Congress: public projects, financial regulation, relief to farmers, the unemployed, elderly, etc.  Federal insurance programs were implemented, in the finance area (Federal Deposit Insurance Corporation) and in the social  area (Social Security and Unemployment insurance).  These programs are not based on entitlement, they are insurance provided by the Federal Government with the employer and employee also paying into the programs.  The ideology behind FDR’s programs was “demand economics”, the belief that capitalism needed consumers with buying power and workers that would contribute to the tax base, a bottom up regulated economy which combined social and capital programs.  Roosevelt’s New Deal set the model for progressive legislation through the twentieth century.

Visionary leadership of Lyndon B. Johnson was in the area of social justice, civil rights and social programs. Goodwin writes, “Everyone agreed that Lyndon Johnson was a master mechanic of the legislative process.  What became apparent from the first hour of his presidency, however, was that he meant to use these unparalleled skills in the service of a full-blown vision of the role government should play in the lives of the people”.  On his first evening as President after the assassination of John F. Kennedy, Johnson asked three of his advisers, Jack Valenti, Cliff Carter and Bill Moyers, to watch television coverage.  “In the early morning hours, Valenti recalled, ‘the new president began to ruminate aloud about his plans, his objectives, the great goals he was bound to attain.  In his mind’s eye he could already envision a future in which all of Kennedy’s progressive legislation, then deadlocked in Congress had become law. ‘I’m going to get Kennedy’s tax cut out of the Senate Finance Committee, and we’re going to get this economy humming again. Then I’m going to pass Kennedy’s civil rights bill, which has been hung up too long in the Congress. And I’m going to pass it without changing a single comma or word.  After that we’ll pass legislation that allows everyone anywhere in the country to vote, with all the barriers down.  And that’s not all.  We’re going to get a law that says every boy and girl in this country, no matter how poor, or their skin, or region they come from, is going to get all the education they can take by loan scholarship or grant, right from the federal government.  And I aim to pass Harry Truman’s medical insurance bill, Medicare.’”  Most of his ‘Great Society” agenda came to fruition which created a giant leap forward for WE THE PEOPLE.

Solid South Democrats that had begun to splinter into the Dixiecrat Party would switch to the Republican Party. President Johnson, a Texas Democrat, realized that enacting President Kennedy’s proposed civil rights legislation would cede the South to Republican control.  President Johnson made a moral choice, not a political choice.  During the remainder of the twentieth century, there were centrists to the right or left with the ability to compromise and legislate. Toward the end of the twentieth century, into the twenty-first century conservatives under the banner of fiscal responsibility had a mission to undo Progressive reforms by asserting states-rights and privatizing government institutions.

Throughout the centuries the American people have benefited from progressive programs that Conservatives have consistently mislabeled as Socialism.

In the first twenty years of the Twenty-First Century, Republicans have failed to garner the popular vote in two of three Presidential elections. The Supreme Court, with a Republican majority, determined the 2000 election between George W. Bush and Al Gore.  In 2008 and 2012 Barack Obama won the popular vote and electoral college.  The “perfect storm” of 2016 caused the election of Donald Trump who has never held the approval of the majority of Americans.

When President Obama took office he followed in the footstep of past progressive presidents and used all the leadership styles presented in Doris Kearns Goodwin’s book to deal with the severe Recession of 2008.  A progressive agenda was proposed by Obama and passed by Congress.  Obama’s accomplishments during his eight years in office are:

Attempts to block and reverse progressive reforms predated Trump’s presidency.  When extreme Conservatives had complete control of Congress prior to 2018, they opposed and attempted to reverse twentieth and twenty-first century progress when Speaker of the House Paul Ryan and Senate Leader Mitch McConnell ran roughshod over established legislative precedence.  Most egregious was Mitch McConnell’s refusal to hold a hearing and vote for President Obama’s Supreme Court appointee Merrick Garland.

Through the twentieth century progressive reforms  supported working people and provided security under a regulated economy which combined social programs and capitalism.  Civil Rights legislation and Supreme Court rulings made the United States a “More Perfect Union” under national programs. Through the  twentieth century, Conservatives labeled these reforms as Socialism.

Throughout Trump’s Presidency it has been difficult to differentiate governing from campaigning for the 2020 election.  His 2016 campaign goal was to divide and conquer by feeding into discontent and hatred, never attaining a majority.  He is using the same strategy as president, using the office of the presidency as a bully pulpit.

The House of Representative under Speaker Pelosi’s leadership has passed and will pass legislation that is log jammed in Mitch McConnell’s Senate. Among them are bills that are supported by the majority of Americans counteracting Russian interference in the 2020 election, immigration reform and gun control. One third of the Senate is up for reelection.  The probability is that red state Kentucky will reelect McConnell, but a Democratic majority would unseat him as Senate Leader and break the legislative dam.

The American majority has the power to bring about change.  Democrats and Independents need to unite in support of Democratic candidates for the Presidency, Senate and House of Representatives. A Quinnipiac poll taken July 25 to 28,2019 has 32% voting for Trump, 12% consider voting for Trump and 54% definitely not voting for Trump.  These statistics may indicate that Trump would easily be defeated, but they do not. Past elections demonstrate that our electoral system may not support the popular vote.  The “winner take all” provision of our electoral system gives the advantage to states rather than the nation as a whole.  There are more “red states” than “blue state” increasing the value of the vote in a swing-state.   That is the electoral system of the 2020 election. 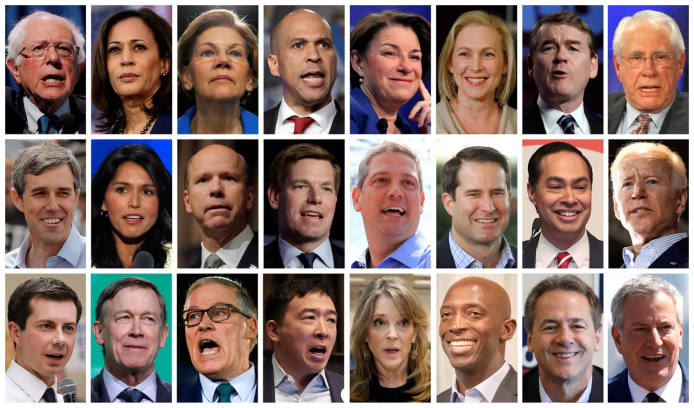 With a large field of Democratic presidential candidates, progressives ranging from centrist to varying degrees to the left represent a Democratic Party that is inclusive and diverse.  Democratic candidates have different ideas on how to bring about reform. In contrast, the Republican Party has become the Party of Trump which follows him in lockstep.  Recent statistics have party affiliations as 27% Republican, 41% Independent and 29% Democratic.  The 2016 election demonstrated that our electoral system requires that the electorate make a binary choice.  Voting for a third party or not voting may result in negating the popular vote as it did in 2000 and 2016.  Trump’s defeat can only be brought about by a unified 60%, Democrats and Independents.

In the article published in USA Today, written by Nicholas Wu on May 1, 2019, it stated the pledge requested by the Indivisible grassroots movement of Democratic Presidential Candidates.

“We Are Indivisible Pledge…

Relevant to current events is the following message given by Toni Morrison in her Nobel Prize lecture in 1993,

“oppressive language does more than express

Violence, it is violence …it is the language

its fascist boots under crinolines of respectability

and patriotism as it moves relentlessly toward

the bottom line and the bottomed-out mind.”

VOTE TO SAVE OUR AMERICAN SOUL

Voter Disenfranchisement
October 23, 2018
Franchise through 18th century to 21st century
Battle For the Soul of America
October 8, 2018
Freedom of the Press
Impact of  communication and transportation inventions on the press
Lifetime Importance of the 2018 Election
July 27, 2018
Voting Rights
June 21,2018
Franchise through 18th to 21st century
A More Perfect Union
May 30, 2018
Impact of the Civil War
All Elections Are Important
May 30, 2018
From Many One
May 30, 2018
An Alert and Knowledgeable Citizenry

One thought on “Twenty-First Century Progressives”